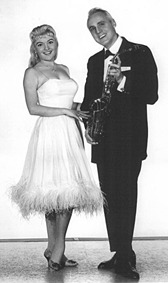 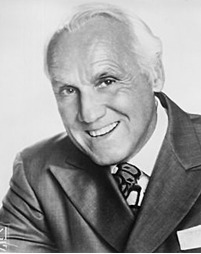 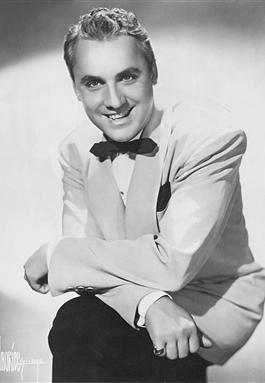 Chicago's big band, the Teddy Phillips Orchestra, provided the swing sound that moved the masses at the Aragon, Trianon and Willowbrook Ballrooms in the 1940s and 1950s.
Teddy's orchestra was one of the best known and most popular in the region, and he continued to headline smaller acts in Las Vegas and Los Angeles in the 1960s and 1970s.
"He came at the end of the era", said Chicago jazz historian Charles Sengstock. "He was one of the last bands to be around." His big songs of the time, "Wishin'", "Don't Call Me Sweetheart Anymore" and "Melancholy Mood" - collaborations with fellow bandleader Al Trace and Teddy's wife, vocalist Colleen Lovett - hint at the big-band era's drift into nostalgia.

Nevertheless, Teddy helped it close with a bang, said Rudy Scaffidi, former lead trumpet player for Mr. Phillips. "Teddy was high-performance all the way," Scaffidi said. "He got everything to be exciting for the people, always."
Teddy Phillips was born in Oak Park, IL where he graduated from Oak Park-River Forest High School in the 1930s. It's during this time, when he began playing the saxophone and soon was labelled "the boy to watch". He formed his first orchestra and attracted the attention of ol' maestro, Ben Bernie. Bernie sponsored Teddy's musical education, gave him his first job with a name band, and willed Teddy his entire musical library. After graduation, Teddy joined the Bill Bardo Orchestra, and for the next decade played and toured with a string of locally and nationally known bands, including the Ben Bernie and Lawrence Welk Orchestras, as well as studio bands for CBS and NBC radio in Chicago.

Colleen expanded her already successful musical career and in 1966 landed a #1 Hit with "Freckle-Faced Soldier". The song climbed the U.S. Billboard Charts and topped the Billboard Charts in Japan. As a result, she toured all across Asia for a year. In the mid 70s she released her solo debut album "Birds With Broken Wings", with more solo recordings to follow.

Teddy continued to be prominent on the dance band scene until the mid-70s, when a car accident forced a reduction in his activities. Nonetheless, he toured the United States briefly in the early 1980s as the leader of a Guy Lombardo tribute band. With Trace, he produced the 1984 album "Great Concert in the Sky", which featured signature songs of famous dance bands. He also engaged in West Coast benefit concerts, often alongside well-known performers, said his sister, Mary Simms Lazopoulos. "Everything was music", she said. "It was his first love. Wherever it took him, he went."

Teddy Phillips passed away from kidney failure in the Spring of 2001 at the Beverly Manor rehabilitation center in Canoga Park, CA. "We were playing the album he produced, 'Great Concert in the Sky', and even though he may have been unconscious, we like to think he heard the music", said Colleen, his close friend and former wife, who was at his bedside together with their two sons. Teddy is survived by his ex-wife Colleen Phillips Lovett, his two sons Joe and Ted Jr., his grandson Alexander, his stepson Jacob, and his three siblings Mary, Thomas and James Simms.

After serving briefly in the Army during World War II, he formed his own band in 1944. The Teddy Phillips Orchestra became a popular regional band and a fixture at the Aragon after first performing there in 1947. In 1956, his performances were broadcast as "The Teddy Phillips Show", a musical variety show on WGN-TV. The band's original compositions, such as "Wishin", "Don’t Call Me Sweetheart Anymore", "Little Canole" and their theme song, "Thankful", were among the most popular of the period.
In the early 1960s, Teddy Phillips and Colleen Lovett married and moved to California, where his variety show continued for a time on local television. Soon after, Colleen and Teddy welcomed their first son, Joe. And with the birth of Ted jr. a couple of years later, the happy family quartet was complete.

By the late 1960s, Teddy had transformed his group into the Mexicali Brass, a Las Vegas-style Mariachi band. The group's unique sound, a combination of the mariachi style made famous by the Tijuana Brass, the golden tones of Teddy's saxophone and the rich quality of Colleen's voice, made the Mexicali Brass a most popular band. They played all the best clubs across the country, appeared on all the top TV shows, had several million seller records and appeared at State Fairs with stars like Bob Hope, Red Skelton, Jack Benny, and many more. Teddy and Colleen recorded several albums together until their amicable divorce in the early 1970s.